Propaganda is information that is used to promote or publicize a point of view or a cause. Propaganda often has the connotation of being biased or misleading in some way-not telling the entire truth because of the need to promote a view, cause, product, or person.

Propaganda is used in a wide variety of circumstances, but it is perhaps most recognizable in the political realm.

Examples of Propaganda from Literature and Popular Culture

In William Golding's Lord of the Flies, Jack espouses much propaganda about the "beast." He plays on the fear in the minds of the other boys by promoting the idea that the thing on the mountain is a "beast" (when it's really just a dead pilot still attached to his parachute). This allows Jack to take control of the "tribe" of boys.

John F. Kennedy uses propaganda to promote the idea that America needs to put a man on the moon, linking the idea to winning a war between tyranny and freedom:

"Finally, if we are to win the battle that is now going on around the world between freedom and tyranny, the dramatic achievements in space which occurred in recent weeks should have made clear to us all, as did the Sputnik in 1957, the impact of this adventure on the minds of men everywhere, who are attempting to make a determination of which road they should take . . . With the advice of the Vice President . . . we have examined where we are strong and where we are not, where we may succeed and where we may not. Now it is time to take longer strides-time for a great new American enterprise-time for this nation to take a clearly leading role in space achievement, which in many ways may hold the key to our future on earth."

Rosie the Riveter was a popular piece of propaganda during World War II. 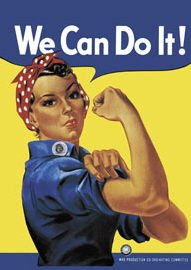