A lever could be something as simple as a wooden board with a ridge that freely rotates or moves on a pivot. The most common and popular lever can be found in many playgrounds: a see-saw or teeter-totter. They are found everywhere and it is one of the most useful simple machines. There are three classes of levers. The image below is an example of a Class One Lever, sometimes called a First Class Lever.

Examples of Class One Lever:

All classes of levers have four basic parts: 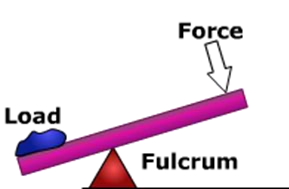 The Class of Lever is determined by the location of the load, fulcrum, and force.

In a Class One Lever, the Fulcrum is located between the Load and the Force. The closer the Load is to the Fulcrum, the easier it is to lift (increased mechanical advantage). Examples include see-saws, crow bars, hammer claws, scissors, pliers, and boat oars.

The claw end of a hammer, along with the handle, is a Class 1 Lever. When pulling a nail, the nail is the Load, the Fulcrum is the head of the hammer, and the Force or effort is at the other end of the handle, which is the Beam. The Load (nail) and Fulcrum are close to each other which makes it easier to remove a nail with the hammer. 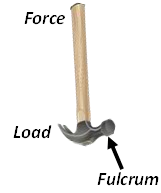 A crow bar works the same way but it has a longer beam (or handle) which makes it easier to remove a nail or other objects like aluminum siding from a house or the wood that makes up floors.

Some simple machines are made up of two Class One Levers such as scissors and pliers. The cutting ends of the scissors is the location of the load, which could be the paper you are cutting. The fulcrum is the point where the scissor blades are joined together. The force or effort is the end or handle of the scissors. The parts of a pair of pliers are similar to the scissors. Notice how the parts are located similar to the image above.