A compound pulley is a combination of the simple and moveable pulley. It is sometimes called a combination pulley. It is designed to make the effort less than half the weight of a load. It is common at construction sites where cranes lift heavy steel and concrete objects.

A combination pulley may include more than just two pulleys or ropes. The more pulleys that are added, the longer it may take to lift an object, but it will be much easier to lift the load. Using the compound pulley above, the load will be much easier to lift, though may take a little more time to lift it. The more pulleys that are attached the easier it will be to lift the load.

Compound pulleys are often used on large sailboats using many different ropes and pulleys. They are also used at construction sites which requires the lifting of heavy equipment. 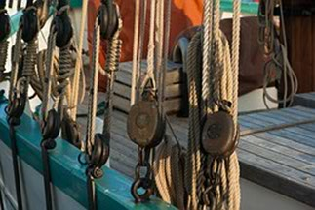 There are also two other types of pulleys: A simple pulley and a moveable pulley. The differences between them are determined by the location and number of wheels and ropes, and the attachment of the wheel and rope.