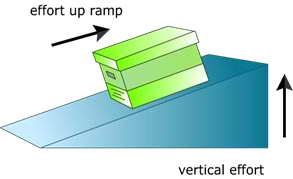 An inclined plane can be made in several different ways. It can simply be a piece of wood placed on the edge of a step, or a log out in the woods leaned against a tree. It could also be a constructed frame with a horizontal bottom (A), a vertical side (B), and then of course the diagonal ramp or slope (B).

The design of an inclined plane will have an effect on how easy or difficult it will be to move things from lower to higher surfaces or vice-versa. For example, moving something will take less work or effort on a ramp with a long distance and a gentle slope. And if there is a steep slope and a shorter distance it will take more effort.

Movers who are carrying a heavy piece of furniture may use the steep slope since they will not need to carry it so far. A person in a wheelchair may use the gentle slope because it would be much easier for them to move the chair's wheels.

Another example of inclined planes is the sliding board often found in playgrounds. Gravity is the force that allows the user to slide down the metal ramp. The taller it is, the faster and shorter the ride will be, but a smaller sliding board will result in a slower but longer ride.

There are several other of inclined planes that may not have a smooth surface and are used by many people such as ladder, steps, escalators, and some walking paths, as well as slides at a water park, mail or package chutes, bowling ball return racks, and many more. As with all simple machines like the inclined

plane, they are designed to help make work easier to do. 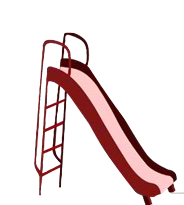