In a moveable pulley, the Load is attached directly to the pulley and both can move from place to place. One end of the rope is attached to a point that does not move. This type of Pulley takes less effort or force to move a Load.

A zip line is an example of a moveable pulley, though both ends of the rope is attached to something, the pulley moves along the rope or metal cable. The load is the person holding onto the pulley or wheel, the rope is fixed in spot, and the force is the attachment to the opposite end of the line. 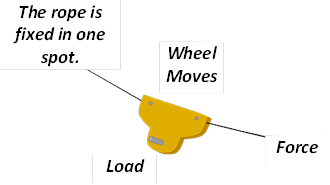 There are also two other types of pulleys: A simple pulley and a compound pulley. The differences between them are determined by the location and number of wheels and ropes, and the attachment of the wheel and rope.