In a simple pulley, the axles are fixed in place and cannot be moved. The wheel is fixed in one spot and the rope moves through the groove in the wheel as shown in the image below. The Load is attached to the end of the rope.

A groove in the wheel keeps the rope in place as it is used to lift up or lower heavy objects, or not so heavy objects like a flag.

The type of pulley is determined by the placement of the rope and pulley, and by the number of ropes and pulleys used.

An example of a simple pulley in use is shown in the image to the right. The bucket of water is being lifted from the well. The object to be lifted is tied to the end of a rope, and the force is applied to the other end of the rope by a person pulling the rope downwards. This force turns the wheel with the rope and the load is pulled upwards at the other end. 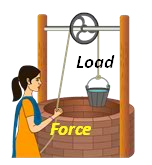 There are also two other types of pulleys: A moveable pulley and a compound pulley. The differences between them are determined by the location and number of wheels, and the attachment of the wheel and rope.