A wedge is a simple machine that almost looks like a ramp or an inclined plane. It is actually made up of two inclined planes joined together. It can be made of wood, metal, stone, or plastic. It is thick on one end and usually thins out to a sharp edge on the other end. They come in all sizes and usually have handles attached to them. 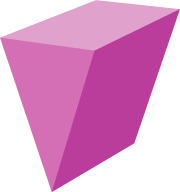 Wedges can be used in many different ways: for cutting, splitting, tightening or to hold back, to hold together, or for scraping, such as a snowplow or farm grader. A wedge works by a braking apart an object as shown in the image to the right. The hammer's force on the wedge is causing the object to break apart in two directions as shown by the arrows. 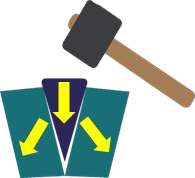 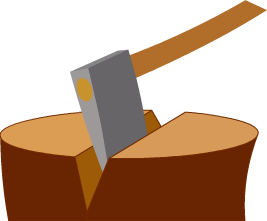 There are two types of wedges: single and double. The examples above are both double wedges. A doorstopper and a chisel are examples of single wedges. Another example of a double wedge, much thinner than an axe, is a knife. All knives are wedges, as are nails, because of their ability to cut or split, and in the case of the nail, to hold something together.

The longer and sharper a wedge is, the less effort it will take for the work to get done. A shorter wedge will require more force and effort because it has a wider angle at the tip. 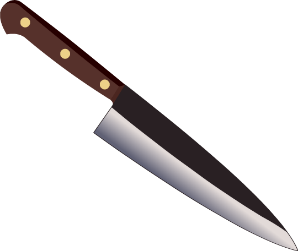 The mechanical advantage (the amount of force used) will be higher with a long wedge having a thinner tip. In other words, the wedge with the thinner tip will be easier to use.

Wedges have been in existence for millions of years with early humans using wedges made of hard rocks and stones to hunt, such as a spear, or used to cut and trim trees or carve other stones. The concept behind the wedge helps with the faster movement of jets and modern cars. They have pointed noses which help them cut through the air and as a result there will be less resistance.

Other common examples of wedges include shovels, teeth, some screwdrivers, a saw, a needle, scissors, and ice picks; or wedges that hold things together like staples, push pins, and tacks. As with all simple machines like a wedge, they are designed to help make some work easier to do.