Ammonium chlorate is a very unstable salt that is mainly used to manufacture explosives. Its pure form is extremely unstable and can easily explode. 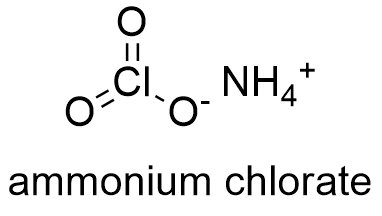 Occurrence: Ammonium chlorate is very unstable, consequently it has not been found in nature.

Preparation: Ammonium chlorate is prepared from the neutralization of chloric acid with ammonia or ammonium carbonate:

Physical properties: ammonium chlorate is a colorless crystal salt. Its density is 2.42 g mL-1 and its melting point is 380 ºC. However, in temperatures >142 ºC it decomposes to form nitrogen, chlorine and oxygen. It is soluble in water and diluted alcohol solutions but it is insoluble in pure alcohols.

Chemical properties: ammonium chlorate is a strong oxidizer, however, its utilization in chemical industry is very limited because its instability. When it is exposed to light can explode and even its diluted solutions are dangerous. The main reason for the unstable behavior of this salt, it is the chemical nature of every ion, ammonium cation is a potent reducer, while chlorate anion is an oxidizer.

Health effects/safety hazards: ammonium chlorate is highly dangerous. Its transportation is prohibited because there is a high risk of explosions. It can violently explodes in concentrated solutions, when exposed to light or heat.