Ammonium sulfate, also written ammonium sulphate, is a salt commonly used as a soil fertilizer due to the high percentage on nitrogen in its composition.

Formula and structure: Ammonium sulfate chemical formula is (NH4)2SO4 and its molar mass is 132.14 g/mol. The molecule is formed by two complex ions: the ammonium ion NH4+ that is tetrahedrical and is formed by a central nitrogen atom bond to four nitrogen atoms and a second complex ion is the sulfate anion, formed by a central sulfur atom bond to 4 oxygen atoms. Its chemical structure can be written as below, in the common representations used for organic molecules. 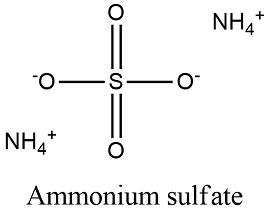 Occurrence: Ammonium sulfate is found in nature as being a component of some minerals as mascagnite, which is found in volcanoes and coal fires.

Preparation: Although ammonium sulfate is found in nature, the quantities are too low compared to the world demand by this salt, so that some methods have been developed in order to get this sulfate. One example is the reaction of ammonia with sulfuric acid.

Another method is the reaction of the mineral gypsum (CaSO4.H2O) with ammonium carbonate.

Physical properties: Ammonium sulfate is a white, hygroscopic, crystalline solid. Its density is 1.77 g/mol and its melting point is 235 to 280 ºC (decomposition). It is highly soluble in water but it insoluble in acetone, ethanol and ether.

Uses: Ammonium sulfate is used as a fertilizer agent for soils due to the quantity of nitrogen presents in the molecule; make it good for that purpose. It is also use as a reagent for molecular biology because it is a good precipitant agent for proteins. Moreover, it is a food additive and an acidity regulator.

Health effects/safety hazards: Ammonium sulfate is slightly toxic if inhaled and can cause eye irritation and respiratory irritation. It is toxic to aquatic life.