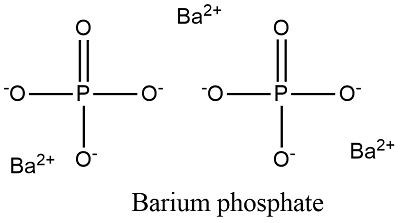 Formula and structure: The barium methaphosphate chemical formula is Ba(PO3)2 and the molar mass is 295.27 g mol-1. The salta is formed by one barium Ba2+ cation, which has two ionic bonds with two polyphosphate PO3- anions. Other additional barium phosphate can be formed after hydration of barium methaphosphate Ba2(P4O12).5H2O, Ba3(P 3O9)2·6H2O. Its chemical structure can be written as below, in the common representations used for organic molecules.

Occurrence: Despite other phosphates, barium phosphate is not found in nature. It is prepared as described below.

Preparation: Barium phosphate is prepared through the reaction of barium chloride and sodium phosphate:

Chemical properties: Barium phosphate can be used in the manufacturing of glasses due to its mixture with sodium forms a low-melting glass that has some wanted proprieties as a high coefficient of thermal expansion. Barium is by self the responsible of the lower melting point of these glasses.

Uses: Barium phosphate is used as a raw material in the manufacturing of special glasses due to its chemical properties.

Health effects / safety hazards: Barium phosphate is harmful if swallowed. It is also harmful if inhaled and can cause eye and skin irritation. It is not flammable and in general, it does not react violently with other chemical compounds.