Bilirubin, also known as hematoidin, is a organic chemical compound that is a bile pigment produced by the human body when the iron present on the blood is degraded.

Formula and structure: The bilirubin chemical formula is C33H36N4O6 and its molar mass is 584.66 g mol-1. The molecule is a macromolecule formed by 4 pyrrole rings which are connected by a long chain of carbon. There are also two double bonds and two carboxylic acid groups. Its chemical structure can be written as below, in the common representations used for organic molecules. 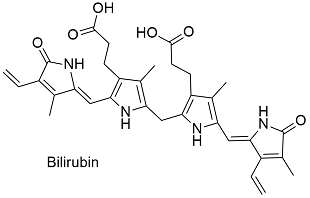 Occurrence: Bilirubin is found naturally in the body of many mammals with the action of the enzyme biliberdin reductase. This macromolecule is fundamental in the metabolism of iron, which is degraded and excreted through the liver in a process that includes the biosynthesis of Bilirubin in the bile. It is finally excreted by the urine.

Preparation: Bilirubin, similar to other macromolecules in nature, has not been produced by chemical methods in laboratories due to the complexity of the molecule.

Physical properties: Bilirubin is a yellow to orange crystalline solid or powder. Its density is 6.45 g mL-1. Bilirubin melting point is 192 ºC and above this temperature decomposes. It is insoluble in water but it is soluble in aqueous acid solution.

Chemical properties: Bilirubin is biosynthesized by the reticulo endothelial during the degradation of erythrocytes which have finished their life cycles. Thus, the hemogloblin-part called Heme is removed and the bilirubin is formed from it. This macromolecule is conjugated with a molecule of glucuronic acid and transported to the bile and finally it will be eliminated by the urine. 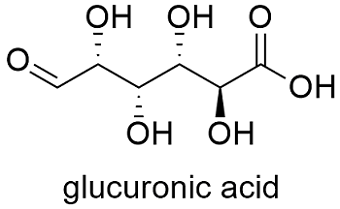 Health effects / safety hazards: Bilirubin is a product of excretion on the blood and high level of this compound in the blood is associated to certain diseases.