Boron phosphate is an inorganic salt, which is used as catalyst in organic synthesis by the chemical industry and more recently, as component in researches of material science.

Formula and structure: The boron phosphate chemical formula is BPO4. Its molar mass is 105.78 g mol-1. Boron phosphate molecule is formed by the cation B+3 and the anion PO4-3, which the anion corresponding to the whole ionization of phosphoric acid H3PO4. Depending of the method using tho prepared boron phosphate, it may have different structures such as noncentro-symmetric tetragonal, similar to the quartz structure. Its chemical structure can be written as below, in the common representations used for organic molecules. 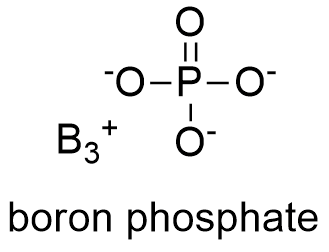 Occurrence: Although some boron compound as borates are very common in nature, it has not been found natural deposits of boron phosphate.

Preparation: Boron phosphate is prepared from the reaction between phosphoric acid (responsible by the formation of phosphate ions) and boric acid, who is the boron source. The reaction can be made between 80 ºC to 1200 ºC, varying the crystalline structure of obtained solid according to the temperature. The reaction that describe the process is:

Physical properties: Boron phosphate can be an amorphous white solid or a crystalline solid according to the method used to obtain it. Its density is 2.52 g mL-1. Boron phosphate is infusible, thus it does not have melting point. However, the solid evaporates above 1450 ºC. The amorphous BPO4 solid is soluble in water but the more crystalline structures are not.

Chemical properties: Boron phosphate can catalyze a variety of organic reactions. It is assume, the capacity of BPO4 as catalyst is related to its surface area and the presence of acidic group inside the molecule. These acidic groups, called active sites, are responsible by the activity of any catalyst. Boron phosphate has a mineral behavior, thus, it is largely use to produce ceramics, glasses and other thermo- resistance materials. The phosphorus present in molecule are responsible for the luminescence observed in the compound.

Uses: Boron phosphate is used in chemical industry as catalyst in some reaction such as dehydration, isomerization, amination and pyrolysis. Some examples of reaction catalyzed by boron phosphate are: the pyrolysis of alkyl vinyl ether to aliphatic aldehydes and the preparation of nitriles from organic acids and ammonia. It also have been used as a phosphating agent in some exchange reaction to obtain metal phosphates of Mg, Ca and Zn. Recently, it has been used to prepare borophosphosilicate glass ceramics and due boron phosphate is luminescent compound, it has been studied as component in LED manufacture.

Health effects/safety hazards: Boron phosphate is irritating to skin, respiratory system and eyes. It is toxic by ingestion. Long-term exposition may cause serious health damage. It is not flammable. It does not react in contact with other chemical compounds.