Boron tribromide, also known as tribromoborane, is an inorganic compounds very used in organic synthesis as catalyst and intermediary by the chemical and electronic industries.

Formula and structure: The boron tribromide chemical formula is BB3. Its molar mass is 250.522 g mol-1. Boron atom is in the molecule center and forms three simple bonds with each bromine. BBr3 molecule is an exception to the rules of octet of valence electrons. Boron tribromide has a planar-trigonal structure, thus, there is 120º between each bonds. Its chemical structure can be written as below, in the common representations used for organic molecules. 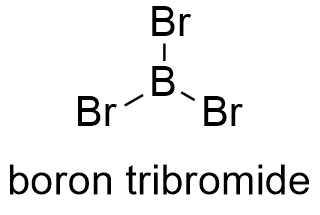 Occurrence: Boron bromide is too reactive to exists in nature. It was synthesized by the first time in 1846.

Preparation: Boron tribromide is prepared from different reactions. In industry, the most used process is the reaction, of boric oxide, carbon and bromine at temperature above 300 ºC . This reaction can also be prepared from boron carbide and bromine. Other method to prepared boron bromide, is the reaction of sodium tetrafluoroborate with magnesium bromide.

Physical properties: Boron tribromide is a colorless to amber liquid, with a pungent odor. Its density is 2.643 g ml-1. Its melting and boiling points are -46 ºC and 91 ºC, respectively. It soluble sulfur dioxide, sulfur dichloride and carbon tetrachloride. Boron bromide is decomposed by water and alcohols.

Chemical properties: Boron bromide is a strong Lewis acid (an electrophilic specie that can accept electrons from a Lewis base to form an adduct). For that, it is used for the cleavage of aryl alkyl ethers; boron atom in BBr3 has an empty p-orbital, which is attacked preferentially by the oxygen, thus, the ether molecule is cleavage: 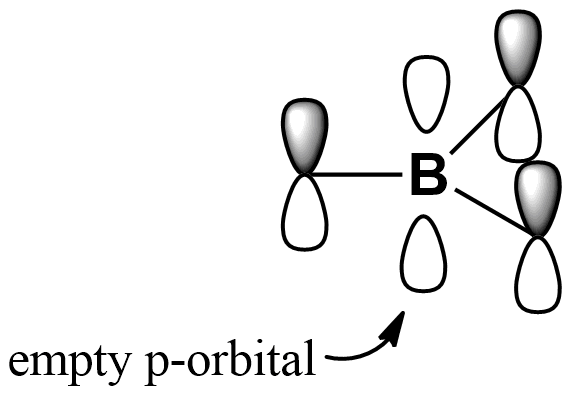 This reaction is followed by a hydrolysis reaction, to give a hydroxyl group, boric acid and hydrogen bromide:

Uses: Boron tribromide is largely used as a semiconductor silicon doping source in electronic manufacturing. It is a raw material to obtain caustic soda and soda ash. Pharmaceutical industry uses boron tribromide to promote the dealkylation of aryl akyl ethers and as catalyst in some reactions due its electrophilic character.