Formula and structure: The boron trifluoride chemical formula is BF3. Its molar mass is 67.805 g mol-1. Similar to boron bromide structure, boron atom is the molecule center and forms three simple bonds with each fluoride, showing a planar-trigonal structure and an empty p-orbital on the boron atom. BF3 molecule is also an exception to the rules of octet of valence electrons. Its chemical structure can be written as below, in the common representations used for organic molecules. 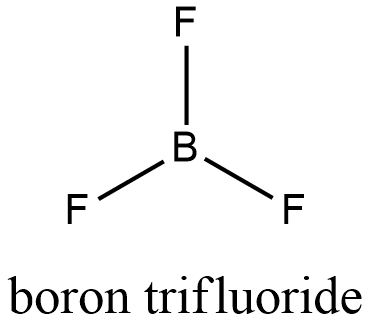 Occurrence: Boron trifluoride does not exist in nature. It was synthesized by the first time in 1808.

Preparation: Boron trifluoride is mainly prepared from hydrofluoric acid, sulfuric acid and anhydrous borax (I) or through the reaction between sodium tetrafluoroborate, boron trioxide and sulfuric acid (II):

Alternatively, BF3 may be produced by boric acid, sulfuric acid and ammonium bifluoride.

Physical properties: Boron trifluoride is a colorless toxic gas with an irritating odor. Its melting and boiling point are -127 ºC and -100 ºC, respectively. Its density is 0.90 g mL-1. Boron trifluoride is soluble in water. It is also soluble in sulfuric acid and organic solvents such as benzeno, carbon tetrachloride, sulfur dioxide and chloroform.

Chemical properties: Boron trifluoride is slowly hydrolyzed in water to form hydrofluoric acid. Consequently with their planar-trigonal structure, boron fluoride is a nonpolar molecule due its polar momentum is zero. Similarly to boron tribromide, BF3 is a Lewis acid due it is "electron deficient and it reacts rapidly with Lewis bases to form Lewis adducts, for example in the reaction between cesium fluoride and BF3 to obtain cesium tetrafluorborate:

Uses: Boron trifluoride is an important Lewis acid very used in organic synthesis. Some of the processes that use BF3 are the production of adhesives and sealant chemicals and lubricants and lubricant additives. It is also a catalyst uses in reaction of alkylation, esterification and condensation. BF3 is the raw material to prepare some boron compounds such as diborane.

Health effects/safety hazards: Boron trifluoride is very toxic by inhalation. It causes severe damages in eyes and skin. In water BF3 forms hydrofluoric acid, which is highly corrosive. When heated, it produces white toxic fumes of fluoride. It decomposes in contact with water. BF3 may attack plastic and rubber.