Carbon tetrabromide, also knowns as carbon (IV) bromide or tetrabromomethane, is a chemical compound used as precursor, reactant and catalyst in the organic synthesis.

Formula and structure: The carbon tetrabromide chemical formula is CBr4. The molar mass is 331.63 g/mol. The molecule is similar to a methane molecule, in which the 4 hydrogen atoms have been substituted by four bromine atoms. The carbon atoms remains in the center of the structure and the 4 bromine atoms are bound by single sigma bonds. The structure is tetrahedrical. Its chemical structure can be written as below, in the common representations used for organic molecules. 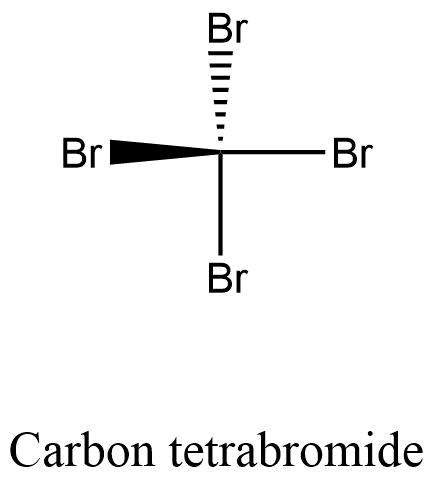 Occurrence: Carbon tetrabromide is not found in nature, it can only be prepared by one of the synthetic routes described below.

Chemical properties: Carbon tetrabromide is a non-polar molecule, which explains why it is not soluble in water. The total dipolar moment of this molecule is zero, making impossible to stablish hydrogen bonds or dipolar-dipolar interactions with water molecules to dissolve it. Instead, it can stablish van Der Waals interactions with organic solvents, to dissolve for example, in ether.

Uses: Carbon tetrabromide is used as a catalyst in organic synthesis. It can also be used in vulcanization and in the production of fertilizers. It is used as a raw material for industrial synthesis of plastic.

Health effects / safety hazards: Carbon tetrabromide is dangerous if inhaled or swallowed. It can cause severe eyes irritation. It can also cause skin irritation. It is not flammable.