Chlorine trifluoride is a gas or liquid very poisonous to human and environment which is mostly used as rocket propellant especially by the military industry.

Formula and structure: The chlorine fluoride chemical formula is ClF3 and its molar mass is 92.45 g mol-1. The molecule is formed by a cation chloride central which is bound to 3 anions fluoride. Additionally, the chloride atom has two lonely pairs of electrons which give a structure of pyramid to the molecule due the repulsion caused by the electron over the fluoride atoms. Its chemical structure can be written as below, in the common representations used for organic molecules. 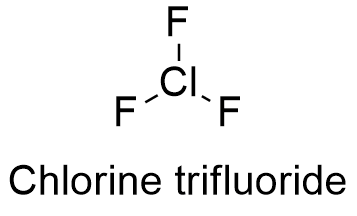 Occurrence: Chlorine trifluoride is a chemical compound very unstable, so that it is not found as free compound in nature.

Preparation: Chlorine fluoride is produced by the reaction between chlorine and fluorine gas at 300 ºC, and using a nickel or copper catalyst:

Physical properties: Chlorine trifluoride is a colorless gas or green to yellow liquid, with pungent odor. Its melting and boiling point are -76 ºC and 12 ºC and its density is 1.77 g mL-1. Chlorine trifluoride is soluble in water, however it decomposes violently in hot water due it reacts to form chlorine and hydrofluoric acid.

Chemical properties: Chlorine trifluoride is a very reactive compound, consequently it can suffer a different kind of reaction such as: the formation of hydrogen fluoride and hydrogen chloride through the controlled reaction with water:

Health effects/safety hazards: Chloride trifluoride is poisonous for human and very toxic for environment and animals. The long term exposition causes severe damage to health. Chlorine trifluoride is extremely reactive. It can easily explode with organic and inorganic compounds. It is highly corrosive to metals and reacts violently with hot water.