Copper (I) sulfate, also known as cuprous sulfate or diccoper sulfate, is an inorganic salt not largely used in the chemistry industry but still found some application in chemical laboratories. 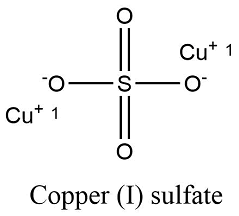 Occurrence: Due to its instability, it is not found freely in nature.

Preparation: Copper (I) sulfate can be prepared from the reaction between the copper (I) oxide and the DMSO (dimethyl sulfate):

Uses: There are not chemical applications described for the copper (I) sulfate, except some chemical reactions in small scale, where it can act as a catalyst. The most common and stable copper (II) sulfate can be used as a catalysts, as an additive in fertilizers and in food and pharmaceutical preservatives.

Health effects / safety hazards: Iron (I) sulfate is very toxic for the aquatic life. It is dangerous if ingested and can cause skin and eyes irritation. It is not flammable. It does not react with other chemical compounds.