Cupric oxide, also known as copper (II) oxide, is an inorganic salt extensively used as intermediate and ingredient in the production of chemical products.

Formula and structure: The cupric oxide chemical formula is CuO. Its mola mass is 79.545 g mol-1. The molecule is formed by the cation copper divalent Cu+2 and the anion oxygen O-2. The molecules form a monoclinic crystal system, where every copper atom is coordinated by 4 oxygen atoms. It is highly related to the other copper oxide: cuprous oxide Cu2O. Its chemical structure can be written as below, in the common representations used for organic molecules. 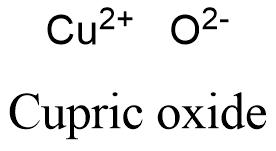 Occurrence: Cupric oxide is found in nature as one of the component of minerals as tenorite and paramelaconite. It is extracted from ores around the world, mainly in South America, in countries such as Peru, Bolivia. Some chemical compounds as ammonium carbonate and ammonia are used to promote the extraction from the ores.

Preparation: Cupric oxide is mostly produced by extraction in ores, however there are some process to produce it industrially. In industries, cupric oxide is prepared by the reaction of ignition of cupric nitrate trihydrate (100-20ºC), cupric hydroxide (100 ºC)or copper carbonate (250ºC):

Physical properties: Cupric oxide is a brown to black amorphous solid or crystalline powder, finely divided. The particles are easily dispersed in air. Its melting and boiling points are 1326 ºC and 2000 ºC, respectively. It is insoluble in water, in diluited acid solutions and it is soluble in ammonium chloride and potasium cyanide.

In acid solutions, it also reacts until other copper salts:

Use: Cupric oxide is widely use in agricultural chemical and chemical industries to produce intermediates in some processes. It is a extensively used oxidizing/reducing agents and a process regulator in chemical reaction, especially in petroleum production. Cupric oxide is used to produce paints and coating and it is also an ingredient in some air care products.

Health effects/Hazard safety: Cupric oxide is an irritant to eyes, throat and nose. It explodes when is heated in contact with aluminum, hydrogen or mangnesium. When heates, it produces some toxic fumes. It is not flammable.