Cupric sulfate, also known as copper (II) sulfate, blue-stone or blue vitriol, is an inorganic salt mainly used as additive to prevent some algae growth and as an antidote for poisoning by phosphorous.

Formula and structure: The cupric sulfate chemical formula is CuSO4. Its molar mass is 159.609 g mol-1. It can be found as an anhydrous or most commonly, as a pentahydrated salt of CuSO4.5H2O, which has a molar mass of 249.685 g mol-1. In water, the cupric sulfate forms metal complex which have a octahedral geometry with six water molecules bound to each copper divalent atom [Cu(H2O)6]2+. Its chemical structure can be written as below, in the common representations used for organic molecules. 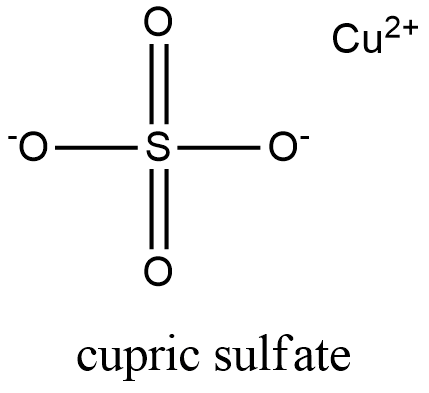 Preparation: Cupric sulfate is industrially produces from the treatment of copper or some copper oxides with sulfuric acid. Finally, the product is crystallized in order to obtain a pure salt.

Physical properties: Cupric sulfate anhydrous is a white amorphous powder, while the pentahydrated salt has a brilliant blue color. Its melting point is 200 ºC with decomposition. It has a pleasant odor and its density is 3.6 g mL-1. It is soluble in methanol and aqueous solution of ammonia or other alkalis. It is not soluble in ethanol.

Chemical properties: Cupric sulfate may easily lose the number of molecules of water that form the pentahydrated salts. Temperature above 63 ºC will promote that lost of hydration. Thus, the cupric sulfate is a very used dehydration agents to organic synthesis.

Health effects/Hazard safety: Cupric sulfate is very irritant to eyes, throat and noses. This salt in contact with skin can caused damage as eczema. It is not highly toxic y ingestion. It is not flammable, but when heated it emits toxic fumes of sulfur oxides.