Dichloromethane, also known as methylene chloride or DCM, is an organic compound widely used in chemical synthesis and industry as a solvent to prepare a huge range of products. 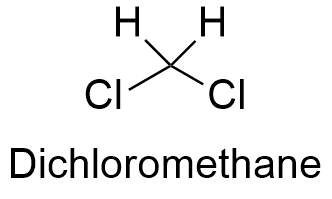 Occurrence: In spite of its toxicity, dichloromethane can be found in nature, especially in emissions of volcanoes.

Preparation: Dichloromethane is found in nature it is not considered a source of it. Almost all the dichloromethane used in industries or laboratories is prepared by the reaction of chloromethane or methane with chlorine Cl2(g) at 500°C. This reaction also produces the others chloroalkanes (CHCl3 and CCl4):

The products of reactions II, III and IV can be separated by distillation since the boiling point of these solvents is enough different.

Physical properties: Dichloromethane is a colorless, volatile liquid with a sweet arome. Its melting point is -6.7 °C and its boiling point is 39.6 °C, meanwhile its density os 1.3266 g mL-1 (the chloride alkanes are more dense than water). Dichloromethane is insoluble in water but it is soluble in organic solvent as ethyl acetate, ethanol, methanol, benzene, carbon tetrachloride, diethyl ether and chloroform.

Chemical properties: Dichloromethane is a polar solvent. It can be thought the two polar momentum vector of the C-Cl bonds would be cancelled, but this molecule, analogous to the methane molecule, has a tetrahedrical structure that allow a sum of the Y-component of these two vectors (see structure bellow). Thus, it solvents is polar although, due to it cannot form hydrogen bonds or another interaction with water, it is immiscible.

Uses: Dichloromethane is a versatile solvent and due to it is not too expensive; it is largely used in chemical industry. It is used for example, to prepare coats and paint removers. It is also used in polymers/plastic and food industries as well. It has been also used as anesthetic in past and also as diluter of inks and compound of sprays.