Ethylene oxide, also known as oxirano or oxacyclopropane, is a chemical compound of the epoxides family that is largely used in chemical industry as precursor and raw material.

Formula and structure: The ethylene oxide chemical formula is C2H4O and its molar mass is 44.05 g mol-1. The molecule is a heterocycle of 3 members: 2 carbons and 1 oxygen atoms, which form the most simply heterocycle. The oxirano is an organic compound and it is part of the epoxide family and the most basic of these units. Its chemical structure can be written as below, in the common representations used for organic molecules. 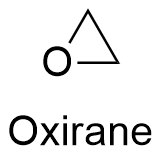 Occurrence: Ethylene oxide is not found in nature as a free compound. It was synthesized by the first time in 1914 by the company BASF.

Physical properties: Ethylene oxide is a colorless with a sweet smell gas. Its density is 0.82 g mL-1. Ethylene oxide melting point is -111 ºC and its boiling point is 10.7 ºC. It is extremely flammable and it can polymerize in very explosive compounds.

Chemical properties: Ethylene oxide is the most basic epoxide and it is very reactive, thus it can be used largely by the chemical industry in innumerable reactions. The reactivity of this compound is associated with its geometry, which is formed by a 3- members cycle, which is not so favorable because the rigidity of the triangle. Thus, ethylene oxide reacts easily to other compounds through reactions such as: polymerizations, additions, alkylations, dymerizations and others.

Uses: Ethylene oxide is used as intermediate in chemical synthesis, especially due to its capacity to reacts with many different compounds to produce: detergents, plastic, polymers, adhesives, rubber, medicines. It is also used as bactericidal and fungicidal disinfectant, thus it is used in sterilization of medical materials.

Health effects / safety hazards: Ethylene oxide is very dangerous to the health; it can irritate mucous, eyes and skin and is also a carcinogenic and mutagenic compound. It may cause death or neurogical disorders. It is flammable. The vapor of this compound causes flammable mixtures with air.