Ethyl acetate, also known as ethyl ethanoate, is an important chemical compound very used as solvent in many chemical reactions.

Formula and structure: The ethyl ethanoate chemical formula is CH3COOCH2CH3 and its condensed formula is C4H8O2. Ethyl acetate is commonly abbreviated EtOAc. Its molar mass is 88.106 g mL-1. Ethyl acetate is an ester which derive from the replace of hydroxyl group by an ethoxy group in the acetic acid. There is an C sp2 in the carbonyl group, but the other part of molecule has tetrahedral geometry. Its chemical structure can be written as below, in the common representations used for organic molecules. 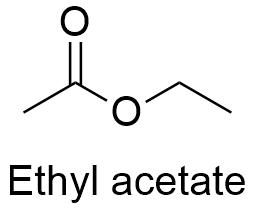 Occurrence: Ethyl acetate is not widely present in nature. However, it can be found in wine and other alcoholic beverage. In these drink are added a small quantity of acetic acid which reacts with ethanol to form ethyl acetate, that is responsible for the taste of some old wines.

Preparation: There are some methods to prepare ethyl acetate. The first method is the reaction between ethanol, acetic acid and sulfuric acid, at 60-70 ºC to promote the esterification of carboxylic acid to ester.

This esterification reaction is a reversible reaction, so that, it can be added an excess of reagents to improve the yield.

Physical properties: Ethyl acetate is a colorless, with fruity odor liquid. Its melting and boiling point are -83.6 ºC and 77.06 ºC and its density is 0.894 g mL-1. Ethyl acetate is not soluble in water, but it is soluble in most of the organic solvents such as benzene, acetone, chloroform and toluene.

Chemical properties: Ethyl acetate and other esters can be hydrolyzed to the corresponding carboxylic acid and ethanol. In the case of ethyl acetate, the reaction is prepared using acids or bases as catalysts and the products: acetic acid and ethanol are produced after a two step mechanism. Other important ethyl acetate reaction is the transesteriferication, where the metoxy group from the ester can be substituted by R- group from an alcohol.

Uses: Ethyl acetate is an important solvent, raw material and intermediate widely used in organic synthesis. Particularly, it is used as solvent in the production of paints, rubber, resins, adhesives, leather, fiber and cellulose. Ethyl acetate, similar to other esters, is a raw material to obtain flavors such as: banana, pineapple and strawberry.

Health effects/safety hazards: Ethyl acetate can irritate eyes and other mucous membranes. It is stable but it is incompatible with strong oxidizing agents. Ethyl acetate is highly flammable and the vapor mixtures can explodes.