Formaldehyde, also known as methanal and more commonly as formol, is an organic compound largely used in chemical industry as precursor in the production of resins, textiles and coatings.

Formula and structure: The formaldehyde chemical formula is CH2O. Its molar mass is 30.026 g mL-1. The formaldehyde molecule has the usual functional group of an aldehyde H-C=O bound to a hydrogen, so that the formaldehyde is the most simple aldehyde. The C atom has a hybridization sp2, thus the geometry of the molecule is planar-trigonal. Its chemical structure can be written as below, in the common representations used for organic molecules. 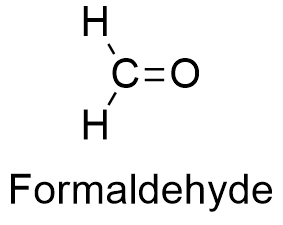 Occurrence: Formaldehyde can be in nature, as one of the component of the atmosphere and even in the interstellar space. The formaldehyde in atmosphere is formed by the reaction between oxygen and methane. Formaldehyde can be found in mammals bodies which are thought produce by themselves. It is not found in the environment due it is easily decomposed by sunlight.

Preparation: Formaldehyde can be prepared by various methods. The most used is the oxidation of methanol, metal-catalyzed by silver, copper, alumina or iron, at high temperature:

Physical properties: Formaldehyde is a colorless, with pungent odor gas. Its melting and boiling point are -15 ºC and -19.5 ºC and its density is 1.09 g mL-1. Formaldehyde gas is soluble in water and forms a solution called formalin which boiling point is 121 ºC. Formaldehyde reacts violently with strong oxidizing such as hydrogen peroxide; and with nitrogen oxide lead to an explosive reaction.

Chemical properties: Formaldehyde is an important precursor in organic synthesis. It is an aldehyde very reactive, so that it can easily reacts to other compounds depending of conditions, for example: a condensation with acetaldehyde to produce pentaerythritol, an important step in the synthesis of some explosives. Other example is the Cannizaro reaction to form formic acid and methanol:

Uses: Formaldehyde is largely used in industries due it great versatility to promote a large numbr of reactions. The formalin solution is used as antiseptic and disinfectant for most of fungi and bacteria and it also used to preserve biological samples. The compound pentaerythritol produces from formaldehyde, is used in the production of explosives and paints. Moreover, formaldehyde is used to synthesize a great variety of resins.

Health effects/safety hazards: Formaldehyde is a very toxic gas. The formalin solution is volatile and it together with the gas are very poisonous for human. It is a chemical compound classified as human carcinogen. When it is heated, there is a high risk of explosion. It is flammable.