Hydrogen nitrate, also known as nitric acid or strong acid, is an inorganic acid that is widely used in chemical industry as reagent for synthesis, specially for forming nitro groups.

Formula and structure: The chemical structure of the hydrogen nitrate is HNO3 and its molecular weight is 63.01 g/mol. It is a monoprotic acid, which means only has 1 acidic proton to lose in reactions or in water solution. It is formed by one proton H+ that is joined to one nitric ion (NO3-). Its chemical structure can be written as below, in the common representations used for inorganic molecules. 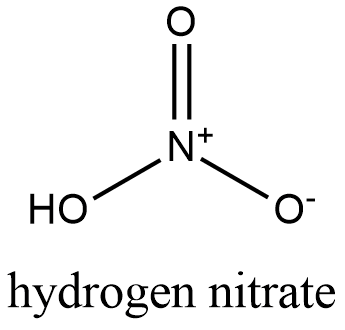 Occurrence: Hydrogen nitrate is not found in nature. The first relates of hydrogen nitrate date from the century 13th, where it was formed by mixing niter, alum and vitriol.

Preparation: Hydrogen nitrate is prepared from the reaction between nitrogen dioxide and water:

It is also produced through the Ostwald process, in which anhydrous ammonia is oxidized to nitric oxide. Second, the nitric oxide is reacted with oxygen to form nitrogen dioxide, which is absorbed in water, forming the nitric acid:

Physical properties: Hydrogen nitrate is a colorless liquid that can turn yellow to red when the solution is old. It has a suffocating smells. In general, it is commercialized as a 68% solution in water.

Hydrogen nitrate density is 1.41 g/mL, and its melting and boiling point are -42 ºC and 83 °C, respectively. It is completely miscible in water.

Chemical properties: Hydrogen nitrate is a very strong acid, it means, in water it is completely dissociated into protons H+ and nitrate ions NO3-. It reacts with metal to form metallic nitrates such as Mg(NO3)2.

Uses: It is largely used in organic synthesis to produce nitrations (insertion of nitro groups on a molecule). However, its main used is in the industry of fertilizers. Hydrogen nitrate is also a rocket propellant very useful and as clean agent for removing corrosion.

Health effects/safety hazards: Hydrogen nitrate is corrosive and highly oxidant. In contact with the skin, it reacts with the keratin dying the skin of yellow. It reacts violently with compounds as cyanides and metallic compounds.