Lithium carbonate, or cabolith, duralith or dilithium carbonate is an inorganic salt used by the chemical industry to oxidize metals and by the pharmaceutical industry in the treatment of bipolarity. It is on the World Health Organization (WHO) model list of the Most Essential Medicines needed in a basic health system.

Formula and structure: The lithium carbonate chemical formula is Li2CO3 and its molar mass is 73.89 g mol-1. The molecule is formed by the lithium cation Li+ carbonate anion CO32- and their crystal structure is monoclinic. Its chemical structure can be written as below, in the common representations used for organic molecules. 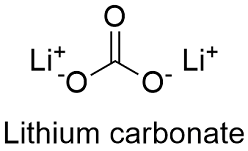 Occurrence: Lithium carbonate is found in ores together other minerals. It can be extracted easily because it is insoluble in water, thus the hot water is used to isolate from other chemical compounds present in ores.

Chemical properties: Lithium carbonate is a salt of lithium most used and it is widely commercialized to the bipolarity treatment. Lithium is the ion most similar to sodium, by size and charge, thus it is a competitor of sodium in the transmembrane exchange in nerve cells, thus it can be affected the release of neurotransmitters. Lithium carbonate can also be used to elevate the peripheral leukocytes.

Uses: Lithium carbonate is mainly used by the pharmaceutical industry in treatments against manic-depressive psychosis. It is also used by the chemical industry in the production of other lithium compounds, especially lithium salts as lithium chloride and lithium bromide. Lithium carbonate is also a raw material to manufacture glass and porcelain. It is also added into electrolytic cells for electrolysis of aluminium due it helps to increase the efficiency of the cell and it is component of many semiconductors and chemical catalysts.

Health effects / safety hazards: Lithium carbonate can be extremely toxic by ingestion in large quantities. It may also cause side effects and other diseases such as nephrogenic diabetes insipidus. It is not flammable.