Magnesium carbonate, also known as magnesite or lansfordite, is a chemical salt that is largely found in Earth in the form of minerals and is used as raw material in the production of other magnesium salts.

Formula and structure: The magnesium carbonate formula is MgCO3. The molar mass is 84.31 g/mol. This salt is found in a broad range of hydrated salts with the formula MgCO3.xH2O, being largely known the di-, tri- and penta- hydrated form. The anhydrous salt, also known as magnesite, is formed by one magnesium cation Mg2+bound to a carbonate anion CO32-. The structure has a calcite crystalline structure with a Mg2+surrounded by six carbonate anions. Its chemical structure can be written as below, in the common representations used for organic molecules. 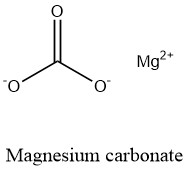 Occurrence: Magnesium carbonate is largely found in nature. It is found in a diverse range of minerals such as the magnesite, artinite and dypingite.

Physical properties: Magnesium carbonate is a white, hygroscopic, odourless, solid. The density of this salt 2.95 g/mL for the anhydrous salt, however the density decreases with the degree of hydration, being 1.73 g/mL in the pentahydrate salt. The melting point is 350 °C for the anhydrous and above the melting point, the salt decompose. Magnesium carbonate is almost insoluble in water and acetone. It is soluble in acid solutions.

Chemical properties: Magnesium carbonate is able to react with acids to form a binary salt that depends on the anion formed from the acid used for the reaction. Similarly to the behaviour expected for carbonates (calcination reaction), when magnesium carbonate is heated, it decomposed to form an oxide and CO2:

Uses: Magnesium carbonate is a salt that is extracted from mineral to be used to form magnesium oxide through the reaction of calcination described above. It is also used as a component of construction materials and in mixture that are added to cosmetics, drying agent and some medicines. For example, it is largely used as a component of anti-acids and laxatives.

Health effects / safety hazards: Magnesium carbonate is non-toxic; it can be ingested but has a limit of diary consumption. It is not flammable and it is not reactive with other chemical compounds.