Morpholine, also called diethylnimide oxide or 1, 4-Oxazinane, is an organic liquid used as intermediate or precursor in the synthesis of other chemical compounds. It is also an ingredient of detergents. 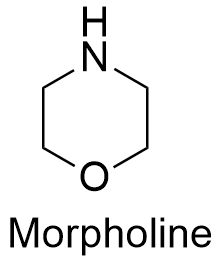 Formula and structure: The chemical formula of morpholine is C4H9NO; the structure is a heterocycle formed by 4 CH2- groups, 1 oxygen atom (ether functional group) and 1 -NH group (amine functional group), with the formula O(CH2CH2)2NH. More specifically, it is both a cyclic ether and amine. It molecular mass is 87.12 g mol-1. The chemical structures can be written as below, in the common representations used for organic molecules.

Occurrence: Morpholine has not been found in nature.

Preparation: Morpholine can be prepared by condensation of ethylene oxide with ammonia. Another methodology is the dehydration of diethanolamine with sulfuric acid at high temperature.

A third methodology is the amination of diglycol under hydrogen and using as catalyst cobalt or nickel.

Physical properties: Morpholine is a colorless, fish-like smell liquid. Its melting point is -5 °C and its boiling point is 129 °C. The density is 1.007 g mL-1. It is miscible in water and also soluble in organic solvents as ethyl acetate, ethanol, methanol and acetone.

Chemical properties: Morpholine is an amine, thus it can be protonated to form the conjugate acid morpholinium. It is a secondary amine, but it is less reactive than other secondary amines due to the oxygen also presents in the cycle can withdraw electronic density, decreasing the nucleophilicity of the amine group.

Uses: Morpholine is an important building block in the preparation of drugs and other important compounds such as enamines, antibiotics, etc. Morpholine is also a common additive in buffer solutions to adjust pH of solutions. When adding pure but in small amount, it is a fungicide and edible coatings for fruits and vegetable.

Health effects/safety hazards: Morpholine is highly liquid and vapor. It can be corrosive to metals. It can cause severe damage to eyes and skin. It is harmful if swallowed or inhalated.