Phosphate is an inorganic ions that form a huge number of phosphate salts such as sodium phosphate, cobalt phosphate and others that are used in many fields as agriculture, chemicals and medicine.

Formula and structure: The chemical structure of phosphate is PO43-, where a central phosphorous atom is bond to four oxygen atoms, one of the bonds is a double bond and the other three oxygen atoms have simple bonds and over such oxygen a negative net are present, thus the ion is trivalent and with a tetrahedrical geometry. The molar mass is 94.97 g/mol and its chemical structure can be written as below, in the common representations used for organic molecules. 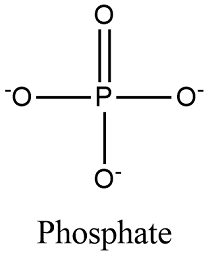 Occurrence: There are dozens of compound formed by phosphate joins to other atoms. These compounds are widely extended in the nature, for example in minerals and rocks, in organism, where is part of cells and complex molecules and in seawater.

Preparation: Most of the phosphate used in the world is extracted from mineral sources. There are some rocks called phosphate rocks, where it is particularly extracted. There are a few methods for producing phosphates in small scale, but any of them are commercially due to the high cost compared to the mines.

Chemical properties: phosphate comes from the dissociation of the phosphoric acid, and since his acid is trivalent, there are three different species that are forming during the aqueous equilibrium.

According to pH of the solution, some of these species can be present in less or more concentration. When the solution is basic, the ions PO43-and HPO42- predominates, while in acid conditions, H2PO4- and H3PO4 predomint.

Uses: Phosphates are used by the biological systems (cells) for forming important molecules as the ATP and ADP that are involved in the metabolism pathway of the respiration. It is also in the DNA and RNA. Phosphates as the sodium and potassium phosphates are widely used as acidity regulators in the food industry.