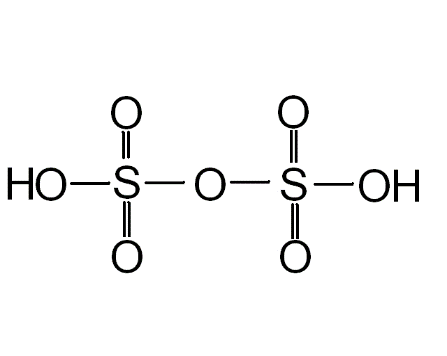 It is also obtained as an intermediate during the preparation of sulfuric acid, through the contact process.

Physical properties: Pure pyrosulfuric acid is a colorless crystalline solid with a melting-point of 36° C. It is more commonly found in a less pure form as a fuming, dense, oily liquid which can be colorless to dark brown depending on its purity level. Since it is usually found as a mixture with some amounts of sulfuric acid, its physical properties are variable.

Uses: Its main uses are in the manufacture of explosives and dyes. It is also used widely as a sulfating agent and in petroleum refining. It is also commonly used as a convenient intermediate or form of sulfuric acid for storage and transportation, due to its less corrosive nature. It can be diluted in water to readily give sulfuric acid of the desired concentration.

Health hazards/ health effects: Its health effects are similar to those of sulfuric acid. Pyrosulfuric acid is a corrosive acid and a strong dehydrating agent. It can cause severe burns on skin contact, and exposure to the fumes can cause severe irritation to the eyes, mucous membranes and respiratory tract. Swallowing can lead to permanent tissue damage and can be fatal.