Serotonin, also known by the IUPAC name of 3-(2-Aminoethyl)-1H-indol-5-ol, is an biochemical molecule found in several organism (plants, bacteria, fungi and animals), which acts as a biochemical regulator of many important functions such as neurotransmission.

Formula and structure: Serotonin molecular formula is C10H12N2O and its molar mass is 176.215 g mol-1. The structure of the serotonin is mostly planar due to the presence of a core formed by an indole ring (a bicyclic shaped by a phenyl ring join to a pyrrole ring); this bicyclic is aromatic and thus, it is formed by sp2 planar carbon atoms. Its chemical structure can be written as below, in the common representations used for organic molecules. 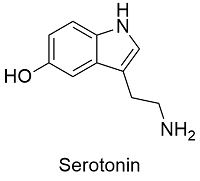 Occurrence: Serotonin is a neurotransmitter found naturally in most of the animals; include invertebrates, vertebrates and mammals. It is also found in plants and fungi and interestedly in some unicellular organisms.

Preparation: There are some few methods to prepared serotonin using synthetic chemistry, but these are not longer extender. The main method is the biotechnological process using some fungi such as Aspergillus niger and Psilocybe coprophila, which are feed with the amino-acid L-tryptophan. In this mechanism the amino-acid tryptophan reacts until the formation of 5-hydroxy-L-tryptophan by the action of the enzyme tryptophan hydroxylase (enzyme 1). The second step is catalyzed by the enzymes decarboxylase and pyridoxal phosphate (enzymes 2) which promote the formation of serotonin.

Physical properties: The serotonin is a white powder. Serotonin melting point is 167.7 ºC and its boiling point is 416 ºC. It is slightly soluble in water and ethanol. It is insoluble in most of the organic solvents.

Chemical properties: Serotonin is a very polar molecule. The first part of the molecule has an hydroxyl group which can react to form other compounds easily. Moreover, it hydroxyl has the capacity of forming hydrogen bond. The other part of the molecule, the ring indole also has a great electronegative potential due to the presence of a pair of alone electrons on the nitrogen of the ring; these electrons are in a sp2 orbital and perpendicular to the pi-bonds of the aromatic system and for that reason are also available to form bonds.

Uses: Serotonin is very important on neurotransmission processes. It acts on the transmitter at synapses of neuron ions. And it is also a hormonal modulator. It is associated to behavioral effects in some animals: aggressive patterns, sexual patterns and sleep. The lack of serotonin in body can cause depression.

Health effects / safety hazards: Serotonin in large quantities is very danger, novice and toxic I swallowed. It is a cancer compound suspected and it damages the fertility.