Sodium azide is an inorganic compound, which explodes easily and for that, small quantity of sodium azide are the main component of airbags.

Formula and structure: The chemical formula of sodium azide is NaN3. Its molar mass is 65.0099 g mol-1. Sodium azide is salt formed by sodium cation Na+ and azide anion N- = N+ = N-. These ions form two type of structures: a rhombohedral and hexagonal. In each type of crystal structure, the azide anion is bound to six sodium cations (three in each nitrogen atoms in the extreme). Its chemical structure can be written as below, in the common representations used for organic molecules. 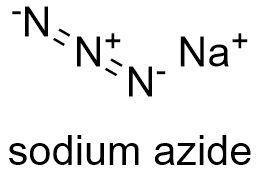 Occurrence: Sodium azide is not found in nature. In part, it could be due it is very unstable and explodes or forms other substances before be detected.

Preparation: sodium azide is prepared industrially from metallic sodium and ammonia to form the sodium amine (I). In a second step (II), the primary amine formed, reacts with nitrous oxide to produce sodium azide, ammonia and sodium hydroxide (that is found as sodium and hydroxyl ions because it is a strong base).

Chemical properties: Sodium azide is extremely poisonous and explosive, thus it has a limited use in chemical synthesis. One of the uses is in car airbag, where a small quantity of sodium azide is added to promote an explosion in case of crash. The reaction also include oxidizing compounds and can be expressed by the equation:

In water, sodium azide can react to hydrazoic acid, which is very toxic compound:

Sodium azide is use in organic synthesis as a route to lead an amine formation. The azide group N3- is introduced in the molecule and it can be reduced in presence of some catalyst as SnCl2.

Uses: Sodium azide is largely used as main compound of car airbag, but it has other important uses in the agricultural field such as pesticide of some pathogens or mutagenic agent for rice or oats crop. Sodium azide is known to be an inhibitor, by binding to the enzyme cofactor avoiding the enzymatic activitiy, of cytochrome oxidase enzyme.

Health effects/safety hazards: Sodium azide is extremely toxic/poisonous and it can cause death. It produces toxic oxides when heated and there is serious risk of explosion when used in large quantities and over 300 ºC.