Formula and structure: The sodium oxide chemical formula is Na2O and the molar mass is 61.98 g mol-1. The oxide is formed by 1 oxygen atom, which has two ionic bonds with two sodium atoms. The molecule has a antifluorite crystal structure, in which Na atoms are coordinated to 4 oxygen atoms while oxygen atoms are coordinated to 8 sodium atoms. Its chemical structure can be written as below, in the common representations used for organic molecules. 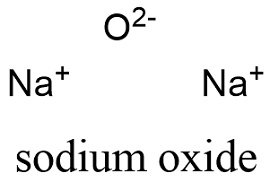 Occurrence: Sodium oxide is not found in nature. It is prepared as described below.

A second method is the thermal decomposition of sodium carbonate up to 850°C, to produce carbon dioxide and sodium oxide:

Physical properties: Sodium oxide is a white crystalline solid. Its melting and boiling points are 1132 °C and 1132 °C, respectively. Sodium oxide density is 2.27 g mL-1. It reacts violently with water.

Chemical properties: Sodium oxide is known due to its reaction with water that produces sodium hydroxide. This reaction is highly exothermic and violent and it is also the reason to keep sodium oxide out of water contact:

Sodium oxide is used in glass manufacturing due to it can react with silicon dioxide (a component of glass) to form silicates that add some features to the material, for example: elasticity.

Health effects / safety hazards: Sodium oxide can cause severe skin and eyes damage. It is corrosive to metals and reacts violently with water.