Formula and structure: The trisodium phopshate chemical formula is Na3PO4. The molar mass is 163.94 g/mol. The molecule dehydrate is formed by three cations sodium Na+ and one phosphate anion PO43-that are bound through an ionic bond. This salt can also be found in some hydrated forms as the trisodium phosphate dodecahydrated Na3PO4.H2O. Its chemical structure can be written as below, in the common representations used for organic molecules. 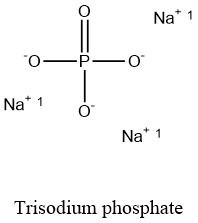 Occurrence: Trisodium phosphate is found naturally in some aliments as meat and vegetables. The phosphate ion in particularly has many biochemical functions and is found in animals and plants.

Preparation: Trisodium phosphate is prepared from the phosphoric acid. This acid in water produced different species by chemical equilibria. These ions can form the different salt by adding sodium hydroxide and sodium carbonate to the aqueous solutions:

Physical properties: Trisodium phosphate is a white crystalline and hygroscopic solid. The density varies according to the hydratation of the salt, being 2.53 g/mL for the anhydrous and 1.62 g/mL for the dodecahydrate salt. The melting point is 1583 °C for the anhydrous and above the melting point, decomposes. It is soluble in water and insoluble in ethanol.

Chemical properties: Trisodium phosphate similar to other phosphate ions forms a variety of species in aqueous solution due to the different acid-base equilibria:

So, to form the trisodium salt, it is needed that the phosphoric acid first stablished three reactions before having enough phosphate PO4 3- available to form the Na3PO4.

Health effects / safety hazards: Trisodium phosphate can be an eyes and mucous irritator. It has been associated with ecological problems in rivers and lakes, mainly the formation of algae due to eutrophication. It is not flammable.