Sugar, also known as saccharose, sucrose or by the chemical name α-D-glucopyranosyl, is a carbohydrate extensively used in the food industry and homemade food preparation.

Formula and structure: The sucrose chemical formula is C12H22O11 and the molar mass is 342.30 g mol-1. The structure is a disaccharide formed by two subunits, one of glucose and one unit of fructose. The crystal structure is monoclinic. Its chemical structure can be written as below, in the common representations used for organic molecules. 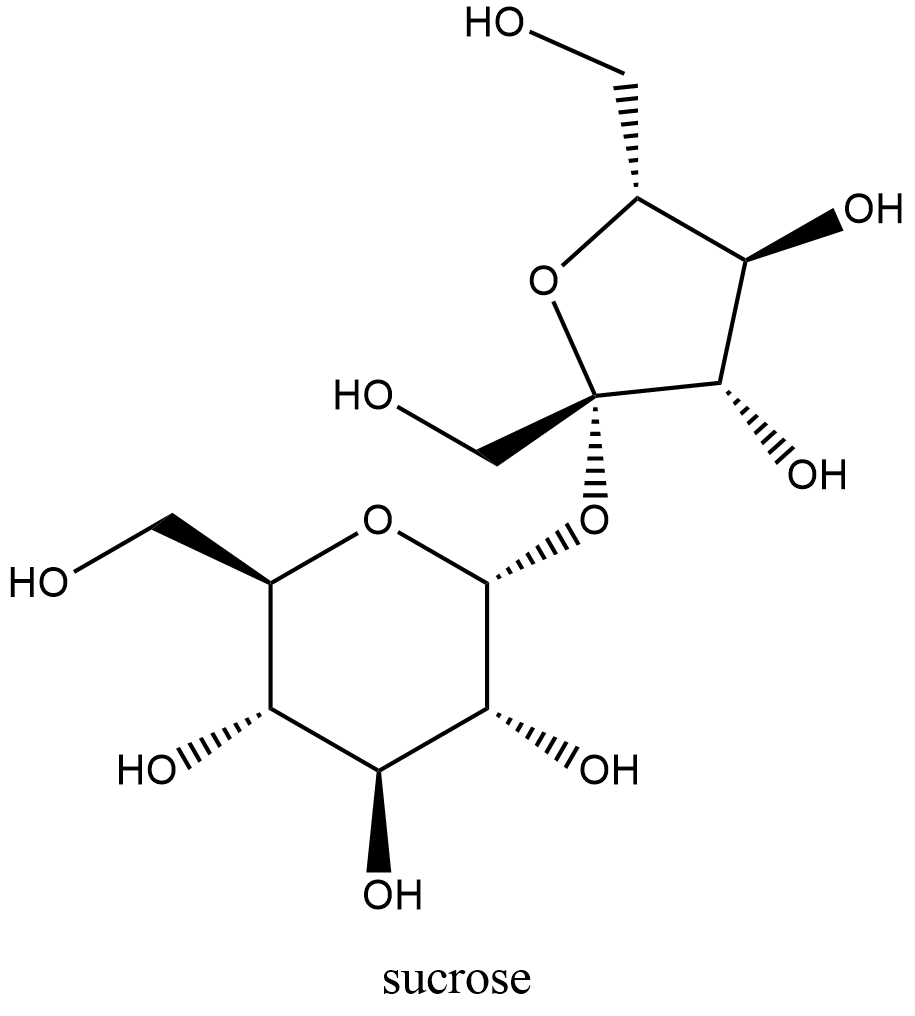 Occurrence: sucrose is extracted from sugar cane or sugar beet. It can also be found in many plants, nectars and participate in the metabolism of many mammas, insects and birds.

Preparation: In industries, it is not synthesized. It is mostly extracted from sugar cane or sugar beet. There have been some attempts for developing strategies for synthesizing sucrose, but it is not economically advantageous.

Physical properties: Sucrose is white, odorless and sweet taste crystalline solid. It is highly soluble in water (2000 g /L) and other polar solvents. Its density is 1.587 g mL-1. The sucrose doesn't have melting point, it decomposes up to 186 C.

Chemical properties: The sucrose is formed by two subunits of other very known sugars: fructose and glucose. One of them is a six member heterocycle (glucose ring) while the another one is a five member heterocycle (fructose ring), both rings are linked by a glycosidic linkage. Its highly solubility in water is due to the presence of several hydroxyl groups in the molecules, which made of this compound a polar structure. Another important characteristic is, sucrose doesn't have melting point, instead it decomposes up to 186 C, forming caramel in a reaction that is very used by the food industry.

Uses: Sucrose is the main ingredient of the modern sweet production. It is used in houses for the preparation of desserts and another important use is as preservation agent in the food industry. It can also be added in some medicines, pills and syrups.

Health effects / safety hazards: Sugar is not a dangerous substance, however is associated to multiple health problems when consumed in excess, for example: Tooth decay, high glycemic index, diabetes and obesity.