Tartaric acid is an important carboxylic acid, which is also called as dihydroxy butanedioic acid. 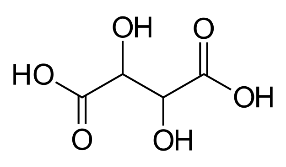 Occurrence: Tartaric acid is found in several plants, fruits and vegetables including tamarinds, bananas and grapes. Several of its salts occur during the fermentation of grapes to form wine.

Physical properties: Tartaric acid is a white crystalline solid with a density of 1.79 g/mL and melting point of 206°C.

Uses: Tartaric acid has many applications in the food industry due to its sour taste and antioxidant properties. It is widely used in carbonated drinks, effervescent tablets, sour candies, gelatins, jellies, baking powders, and taffies. It also has many industrial uses such as in photographic printing and development, polishing metals, wool dyeing, etc. The tartrate salts are used in silvering mirrors, cleaning brass, dyeing mordant, and as insecticide.

Health effects/safety hazards: Tartaric acid is safe for human consumption is low doses and is used in food products. However, in large doses it can be harmful. It is a muscle toxin, which can cause paralysis and death when swallowed in large amounts.