Tert-Butanol, also known by the name tert-butyl alcohol or t-BuOH, is an isomer of the butanol (alcohols of 4 members) used as solvent, as component of fuels and also as intermediate or reagent in organic synthesis.

Formula and structure: The chemical formula of tert-butanol is C4H9OH and its extended formula is (CH3)3COH. Its molar mass is 74.12 g mol-1. The molecule is formed by a central carbon atom which has 3 methyl groups -CH3 attached and 1 hydroxyl group -OH forming a tetrahedrical structure around this central carbon. Tert-butanol is one of the 4 isomers of the 4 carbon alcohol family. The chemical structure can be written as below, in the common representations used for organic molecules. 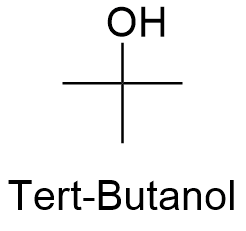 Occurrence: Tert-butanol can be found in nature, particularly in chickpeas and ginger. It has also been found in some products that are manufactured by fermentation, for example beers and cassava.

Preparation: Tert-butanol is obtained as by-side product during the preparation of propylene oxide from the alkane isobutane. Other methods are the addition of water to 2-methylpropene in an acid-condition or by the reaction of Grignard reaction between acetone and methylmagnesium chloride.

Physical properties: Tert-butanol is a colorless liquid or also a white solid with a sharp alcohol or camphor-like odor. The density is 0.775g mL-1. Its melting point is 25 °C and its boiling point is 83 °C. It is miscible in water and also soluble in organic solvent as ethyl acetate, ethanol, methanol, benzene and acetone.

Chemical properties: Tert-butanol is one of the four butanol isomers. It is the least reactive of this family due to the central carbon is a tertiary carbon (it means that is bond to 3 carbon atoms) which able to get a high stabilization of positive net, thus it is less reactive. However, it can also be deprotonated using a strong base to generated the tert-butoxide anion which is a nucleofile widely used in organic synthesis.

Uses: Tert-butanol is used as an additive in fuels and also as a intermediate in the preparation of plasticizers and other chemical compounds. It is a solvent using in laboratory and also a solvent for cleaning and degreasing products. As a nucleofile, it is largely used in nucleofilic substitution reactions.

Health effects/safety hazards: Tert-butanol is highly flammable in its liquid or vapor state. It can cause irritation in eyes and mucous and is also harmful if inhaled.