Titanium (IV) oxide, also known as titanium dioxide, is an inorganic compounds that is the mos t broad utilized white pigment by industries. 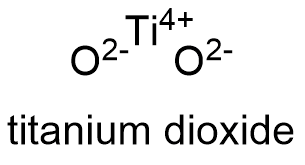 Occurrence: Titanium dioxide is found in nature in the mineral rutile. This is a dark, brown, yellow or orange mineral. It is also found in the minerals anatase and brookite but in lesser quantities.

Preparation: There are few methods describing the preparation of titanium (IV) oxide, the easier process is the direct combination of titanium and oxygen. Most of TiO2 used in world is extracted from natural deposits. Tue rutile extracted is treated by different process to obtain pure titanium dioxide. The processes include the treatment with sulfuric acid.

Physical properties: Titanium dioxide is an odorless and tasteless white crystalline powder. Its melting and boiling points are 1840 ºC and 2900 ºC, respectively. Its density is 4.26 g mL-1. It is insoluble in water, hydrochloric acid, nitric acid, diluted sulfuric acid and organic solvents. It is soluble in hot concentrated sulfuric acid and hydrofluoric acid and alkalines solutions.

Chemical properties: Titanium dioxide can be used as a white pigments because it has a high refractive index. It has a powerful oxidized potential, thus it is very use to produced photocatalyst and in biorremediation, where it has been used in the treatment of wasterwater to promote the oxidation of some contaminants to a less dangerous compounds.

Uses: titanium (IV) oxide is widely used as pigment in fiber, rubber, electrical, plastic, automotive, metallurgy, paper and ink manufacture. Particularly, it is used for making high-grade white pigment to use as paint, varnishes, lacquers and coating additives. It is also used to produce electronic component due the semiconduction capacity of TiO2. Titanium (IV) oxide is a chemical compound approved by the FDA (Food and Drugs Administration) as safety ingredient to cosmetic and food.

Health effects/ Hazard safety: Titanium (IV) oxide cause eyes, nose and respiratory system irritation. It is a suspected carcinogenic agent. It is not flammable and it is compatible with other chemical compounds.